average energy use in an Australian home, 2011

The energy solutions world has obviously been given a big boost by the decisions in Paris recently, so all the more reason to analyse the success of changes to building designs, and how they can lead to lower emissions worldwide in the future. As I wrote last year, Australia has been consuming less electricity of late, a turnaround which is a historical first, and the main cause has been energy-efficient new buildings and appliances, regulated by government here, no doubt in conformity with other western regulatory systems. So what exactly have these changes been, and how far can we go in creating energy-efficient buildings?

In Australia, all new buildings must comply with the Building Code of Australia, which prescribes national energy efficiency requirements and here in South Australia the government has a comprehensive website outlining those requirements as well as, presumably, state additions. New buildings must achieve a six star rating, though concessions can be made in some circumstances. In South Australia, energy efficiency standards are tied to three distinct climate zones, but the essential particulars are that there should be measures to reduce heating and cooling loads, good all-round thermal insulation, good glazing, sealing and draught-proofing, good ventilation, effective insulation of piping and ductwork, energy efficient lighting and water heating, and usage of renewable energy such as solar.

But energy efficiency for new housing doesn’t end with the buildings themselves. The Bowden housing development, which is currently being constructed in my neighbourhood, aims to reduce energy consumption and emissions through integrated community living and facilities, green spaces, effective public transport and bikeways, convenient shopping, dining and entertainment, and parks and gardens for relaxation and exercise. It all sounds a bit like paradise, and I must admit that, as I grow older, the final picture is still a long from taking full shape, but as we move away from oil, upon which we still rely for transport, this kind of integrated community living could prove a major factor in reducing oil consumption. The national broadband system will of course play a role here, with more effective internet communication making it easier to conference nationally and internationally without consuming so much jet fuel. It’s probably fair to say that this is an area of great waste today, with large amounts of greenhouse gases being emitted for largely unnecessary international junkets.

Recently it was announced that the Tesla Powerwall, the new energy storage technology from Elon Musk’s company, will begin local installation in Australia, with the first installations happening this month (February 2016). There are other battery storage systems on offer too, so this is another burgeoning area in which residential and other buildings can be energy-efficient.

So we’re finally becoming smarter about these things, and it’s making measurable inroads into our overall energy consumption. Other strategies for lightening our environmental footprints include embodied energy and cogeneration. These are described on the Urban Ecology Australia website. Embodied energy is:

The energy expended to create and later remove a building can be minimised by constructing it from locally available, natural materials that are both durable and recyclable, and by designing it to be easy to dismantle, with components easy to recover and reuse.

And cogeneration is defined thus:

Cogeneration involves reusing the waste heat from electricity generation, thus consuming less fuel than would be needed to produce the electricity and heat separately.
Small, natural gas powered electricity generators in industrial or residential areas can supply heat for use by factories, office buildings, and household clusters.
The heat can be used for space heating, hot water, and to run absorption chillers for refrigeration and air-conditioning. It can be used in industry for chemical and biological processes.

Clearly there’s no over-arching technological fix for energy reduction, at least not in the offing, but there are a host of smarter solutions with a combinatorial effect. And governments everywhere can, and should, play a useful, example-setting role. 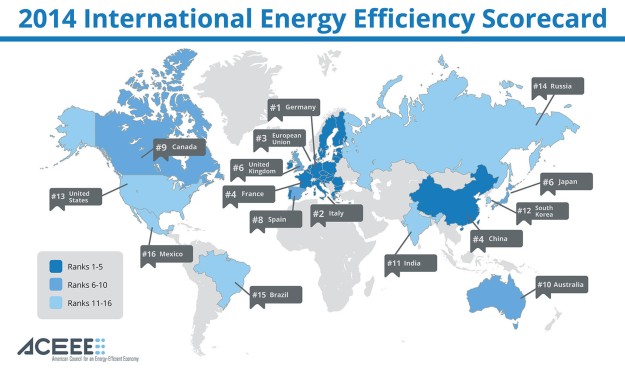 Australia ranks 10th of these 16 countries for energy efficiency. However, we’re 16th for energy-efficient transport, so presumably we’re further up the ladder for housing